AirFibr is a patented turf technology
after 4 years of research and development.

A widely recognized and rewarded innovation 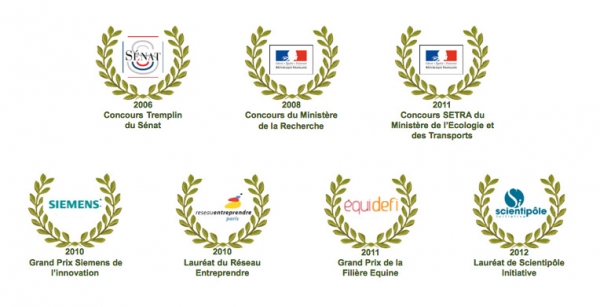 The breakthrough innovation brought by Natural Grass has been widely recognized by the French scientific community and won with the most prestigious rewards.

Its track record ranges from entrepreneurship prizes prizes (the “Réseau Entreprendre” prize in 2010,“Scientipole initiative” nomination in 2012) to innovation prizes (the Ministry of Research national award in 2008, the Equidéfi competition for the equine sector in 2010, and the Setra competition for road innovation in 2011) awarding exceptional Research and Development projets.

In order to demonstrate the benefits of our technology and to continuously improve it, Natural Grass has developed many research partnerships with the most prestigious French laboratories. These collaborations resulted in particularly ambitious R&D programs, notably the research program for the AirFibr technology led by the laboratory for biomechanics of ENSAM which was the first in the world of this scope.